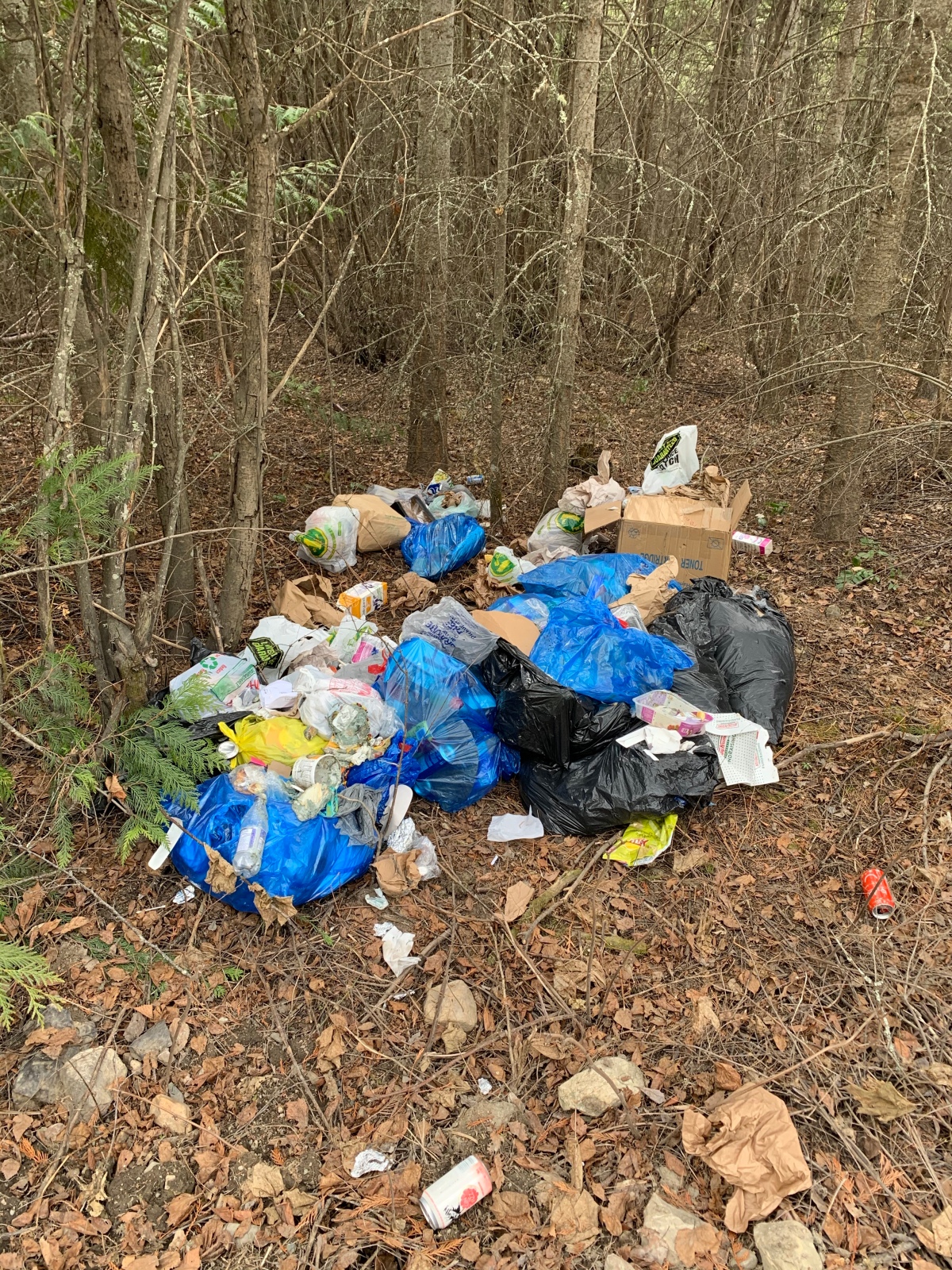 I’m writing to you to let you know that you, um, “forgot” the belongings you left in the bush beside our access road. I doubt forgetfulness had anything to do with this, as I’m sure it was purely intentional and due to laziness and stupidity.

Returning home, we were around a half kilometre up our gravel access road when we spotted a huge pile of garbage bags dumped in the bush beside the road. I’ve included a picture of your garbage below, in case you need a refresher.

Animals had already started working on the pile and some bags were ripped open and spewing contents by the time we happened upon your crap. Household garbage mostly with many recyclable cardboard and plastic containers. Drug paraphernalia too. Your garbage is painting a rather unfavourable picture of you, do you realize or care? Returnable pop and juice cans too! There were enough returnables in this pile to pay your dumping fee. Lazy, ignorant asshole. Why?!?

We have some fine upstanding neighbours who regularly patrol and even park at the bottom of our access road around the time the local landfill closes to deter those who arrive after closing and decide to dump their crap up a nearby forest service road rather than bring it back home. It’s too bad they weren’t around to snap a pic of your license plate number and take some notes as you drove by. Can’t you tell time or know how to check the landfill business hours? They haven’t changed in years!

Just wanted to let you know that we had exactly 40 minutes from the time we spotted your mess until the dump closed to get home, grab gloves and a supply of garbage bags, return to the site of the crime, clean it up and off to the dump. And…. we did it! Then again, we aren’t lazy or stupid.

Thankfully, most of the bags were still intact enough we were able to slide them into new bags without spilling the gross contents. While it pained us to not separate out the recyclables and returnable, it was the choice between making it with our load before the dump closed or not, and having to store your crap for a few days since the landfill isn’t open 7 days a week. You’d know this if you’d taken the time to check their business hours first.

We were trying to keep an eye out for mail with your address and name we could then report to the police. We’ve done this before, and sad to say we will likely do it again. Unfortunately, with this load we didn’t have the time to sift through and find the evidence we were looking for which I’m sure it was there since you’re clearly not that bright.

You’d think a good samaritan act as ours would go unpunished, but we end up paying the dumping fee when we do this. In this case the fee was $6.00. Not a sum that’s going to break us, and judging by the food containers in your garbage, you eat well enough that the $6 fee wouldn’t break you either. You’re welcome. Again.

Yes, you’re welcome you ignorant, entitled, lazy jerk. You clearly lack basic intelligence and the lack of respect you show for our environment is jaw-dropping. Next time I hope to have those extra few minutes to dig through your crap and find a name and address.

Just in case this post is making you squirm with guilt, here’s a pic of the crap pile. Maybe you recognize it?

I'm a VIP Support Engineer at Automattic Inc. and love helping people with WordPress. Based in Lumby BC, Canada, I enjoy playing outdoors and am a true left-coaster in my belief of keeping it green, real and fun. View all posts by Linda